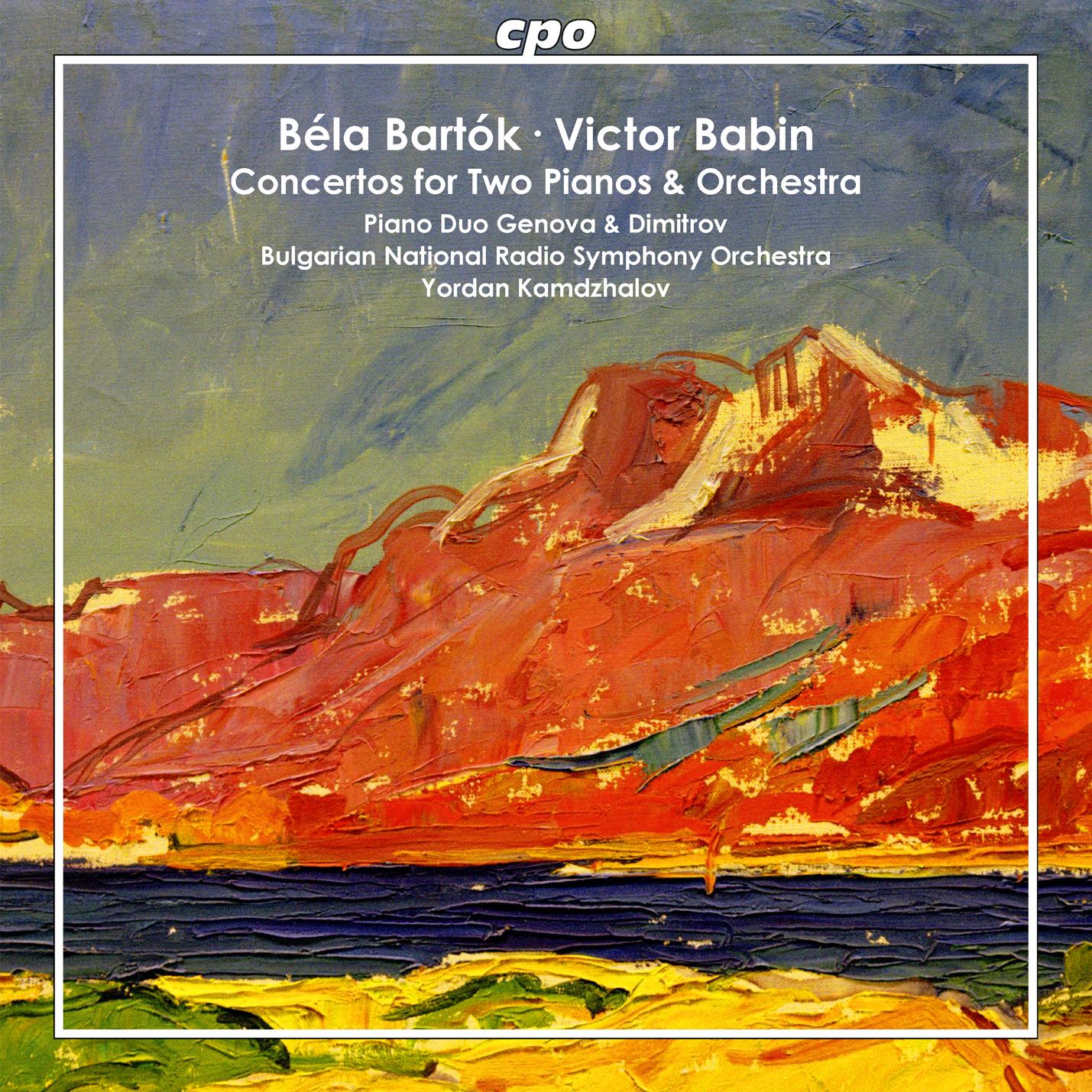 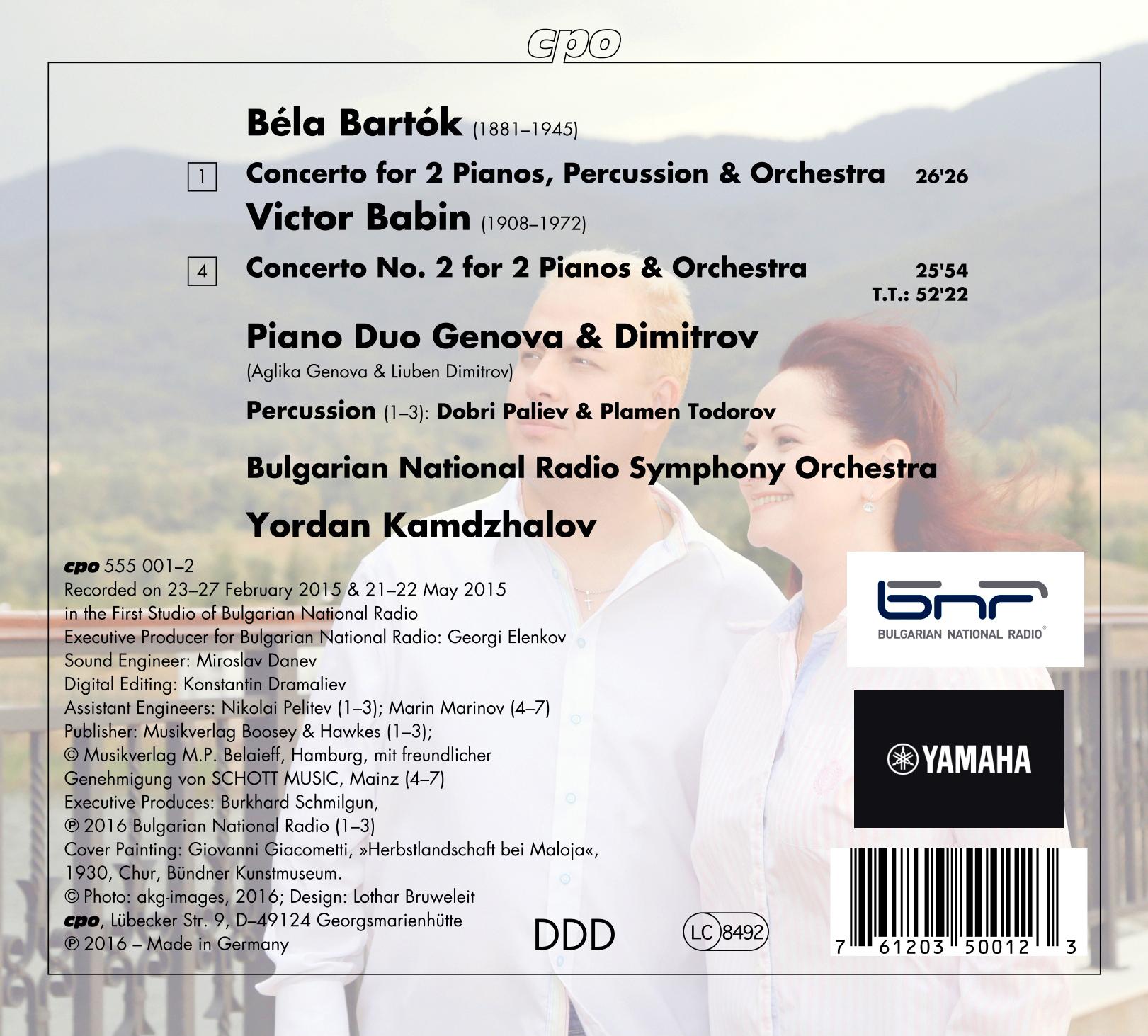 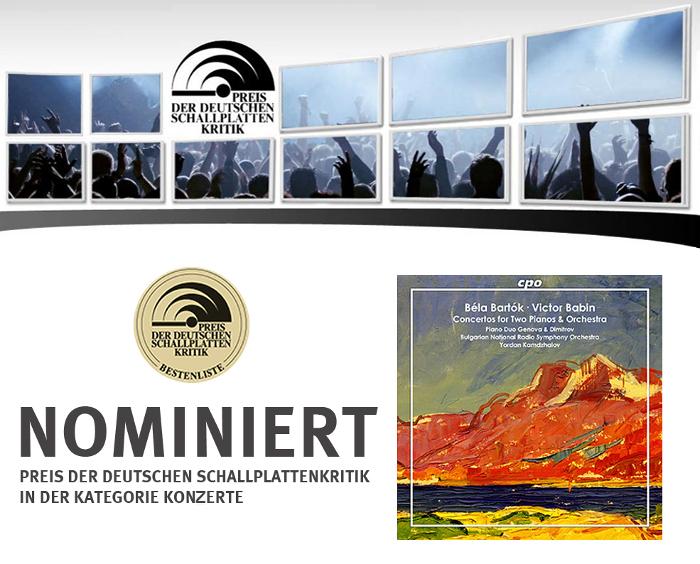 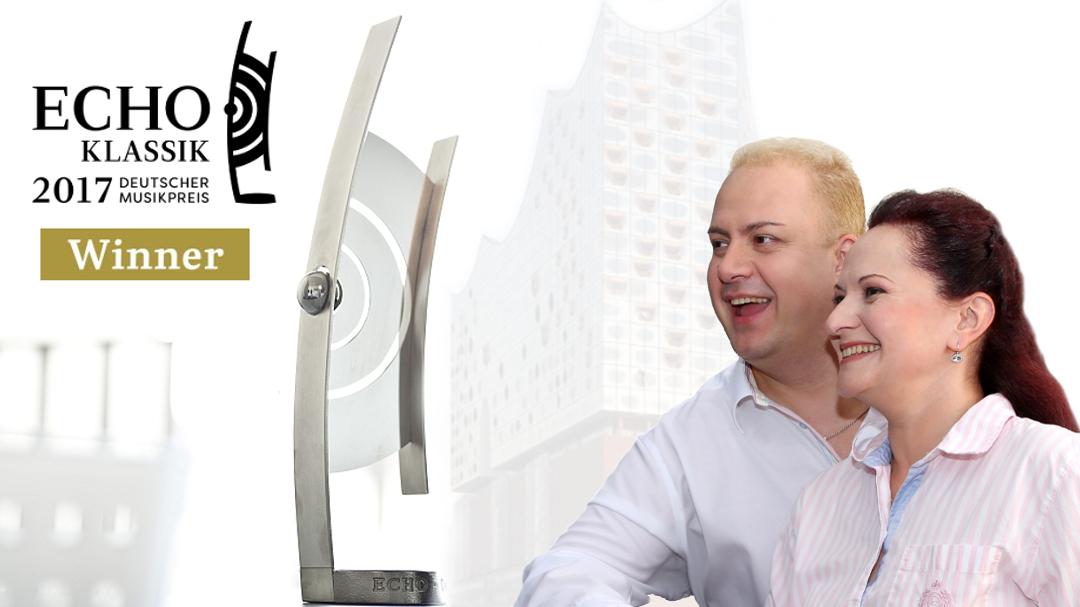 REDISCOVERY
We have been familiar with the musical content of Béla Bartók's Concerto ever since our studies at the Hanover University of Music. At the time we worked with our teacher Vladimir Krainev on the chamber version of this work, that is known as Sonata for Two Pianos and Percussion. During the development of the idea for this CD project, however, we were simply overwhelmed by the completely different sound volume, by the incomparable dimension and wealth of colors, that this Concerto score of the work reveals. It unleashes unexpected powers that vault us and our listeners within splits of seconds to the soaring heights of a supernatural realm.

NEW DISCOVERY - World Premiere Recordings -
We first learned about Victor Babin as a pianist in the Vronsky & Babin Duo and as a composer of the Concerto No.2 from Loretta Dranoff, who founded the world's biggest piano duo competition in Miami and served as its president for many years. She had been a member of the famous American Murray and Loretta Dranoff Duo herself, thus she had known both of them personally. During our extended private conversations prior to her death she expressed to us many times her fondest wish: she hoped to live to hear us perform his wonderful work on CD and to experience its establishment as a permanent part of the concert repertoire on the world's stages.

▪ ECHO Klassik Music Award 2017 for Genova & Dimitrov
The Piano Duo has been awarded the world's most prestigious classical music prize in the Category "Concerto Recording of the Year (20./21.Century)" for their CD "Bela Bartok & Victor Babin - Concertos for Two Pianos" (cpo) with the Symphony Orchestra of the Bulgarian National Radio led by Yordan Kamdzhalov | read

▪ AMERICAN RECORD GUIDE: "Genova & Dimitrov are one of the best duos in the world today!" USA | read

▪ The top rating review of music pope Ingo Harden about the new CD in the German magazine FONO FORUM
"The internationally renowned Duo Genova & Dimitrov (...) performs with its usual precision and brilliance and is supported reliably by its Bulgarian compatriots in these recordings." | read

▪ "Go for it!" - David Hurwitz about "Bartok & Babin" in the "Classics Today"
USA  David Hurwitz with a marvellous review about the Artists' new CD "Bartok & Babin" in the renowned US music magazine: "Major Discoveries: Victor Babin, the Composer... Very well played by the duo Genova & Dimitrov!... With evident joy, and well worth to getting to know... Go for it!" | read

▪ "Listen and Marvel!": Luxemburger Pizzicato Music Magazine with Top Rating
During one of the rare and short relaxing times on the balcony of their Miami domicile, the Artists enjoy reading the brilliant top-rated press review about their new CD "Bartok & Babin" in the Luxembourg "Pizzicato" Music Magazine | read

▪ "A grandiose proof of one of the world's best piano duos!": PianoNews Magazine
Carsten Durer, the Editor-in-Chief of the Europe's leading German-speaking piano magazine on the new CD "Bartok & Babin" in the March/April issue | read